Three-dimensional breast imaging — called 3-D tomosynthesis — can reduce the number of “false alarms” from breast cancer screening. In panel 1 (above) is a mammogram of 45 year-old female. A suspicious area is outlined.

By viewing the tomosynthesis slices (panels 2 to 4) the radiologist can be assured that there is no cancer present, but only normal tissue structure at that location.

Looking at a regular mammogram, explains Dr. Martin Yaffe, senior scientist at Sunnybrook Research Institute, is a lot like looking through the glass at an aquarium. “You don’t see the little fish behind the others.”

That incomplete view is challenging when the patient is a younger woman who typically has more dense tissue and less fat in her breasts, meaning small cancers may lurk unseen.

Dr. Yaffe and his Sunnybrook colleague Dr. Roberta Jong, a radiologist specializing in breast imaging, are Canadian pioneers in advancing new techniques and technology for mammograms for younger women and those with dense breasts.

They led the Canadian contribution to the landmark study – D-MIST (Digital Mammographic Imaging Screening Trial) – that compared the diagnostic accuracy of film and digital mammography.

Dr. Yaffe describes the newer technique as “looking slice by slice.” Instead of taking just two digital views of the breast, TMS takes up to 15 images that are layered into a three-dimensional view. “It’s less likely that structures would be hidden,” explains Dr. Yaffe.

The 3-D view not only finds more abnormalities, but it also reduces the number of false alarms.

Preliminary studies suggest that TMS reduces the chances of false alarms by about 30 per cent.

When TMS finds cancers that may otherwise not have been recognized until later, it can result in less aggressive treatment, meaning breast conservation and increased survival rates, he says.

Or, as is often the case with prostate cancer, testing a tiny malignant tumour found in the breast may indicate that it poses no risk and requires only “watchful waiting.”

The researchers are currently recruiting more than 6,000 women at four sites in Canada for T-MIST, while looking to extend the trial to 148,000 women across 14 more sites in North America. 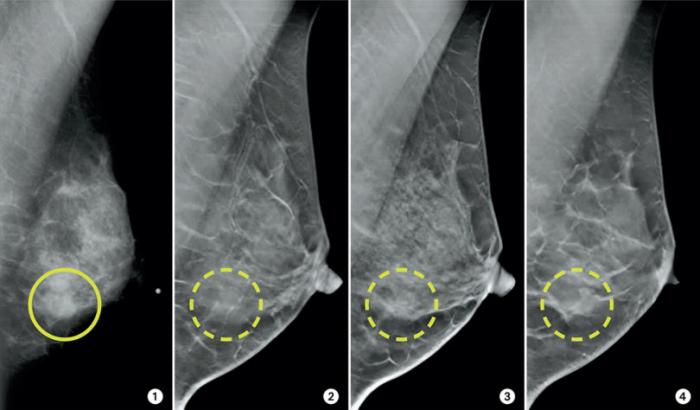