London, Ontario, August 7, 2013 - The Centre for Imaging Technology Commercialization (CIMTEC), Western University and Claron Technology Inc. are developing hardware and novel software modules to be integrated into an image-guided oncology therapy system for wide distribution abroad by Perfint Healthcare, based in India.

“This collaborative project has the potential to profoundly impact liver cancer treatment in developing countries such as India, North Asia and part of Europe where access to CT (computed tomography) and MR (magnetic resonance) scanners is extremely limited,” says Dr. Aaron Fenster, CIMTEC Centre Director and founding Director of the Imaging Research Laboratories at Robarts Research Institute at Western’s Schulich School of Medicine & Dentistry. “The big advantage is that highly accurate ablations can be performed in a procedure suite, as opposed to a CT scanner, making them more accessible, faster and much cheaper.”

Hepatocellular carcinoma (HCC), the most common type of liver cancer, is the fifth most commonly diagnosed malignancy and the third most frequent cause of cancer related deaths worldwide. Furthermore, the liver is the second most common site of metastatic cancer arising in other organs.

Incidence is particularly high in Asia and sub-Saharan Africa due to the large incidence of hepatitis B and C on those continents. Both hepatitis B and C are complicated by cirrhosis of the liver, which is the greatest risk factor for HCC. Recently, several Western countries have been reporting increasing trends in HCC.

Minimally invasive percutaneous techniques, such as radio-frequency (RF) and microwave (MW) ablation of malignant tissue in the liver is a rapidly expanding research field and treatment tool for patients who are not candidates for surgical resection or transplant. In some cases this acts as a bridge to liver transplantation. Due to low complication rates, faster recovery times and reported survival rates comparable to resection, the indications for these minimally invasive procedures are continually increasing. However, these methods have a higher local recurrence rate than surgical resection, mostly due to insufficient or inaccurate local ablation of cancerous cells due to the limitations of conventional ultrasound image-guidance.

CIMTEC’s work on 3D ultrasound-guided focal liver tumour ablation was born out of a project funded through the Ontario Institute for Cancer Research (OICR). OICR’s Imaging Translation Program (ITP) team has been addressing the limitations of conventional 2D ultrasound imaging, the most commonly used modality for guiding and monitoring radio-frequency ablation (RFA) and microwave ablation (MWA) of liver tumours. The new system invented through ITP (two patents filed) is based on 3D ultrasound imaging. It will increase the accuracy of identifying and localizing a tumour and reduce, perhaps even eliminate the need for intra-operative CT imaging.

The prototype system showed very positive results during testing in the clinic of interventional radiologist, Dr. Nirmal Kakani at London Health Sciences Centre in London, Ontario. At the same time, Perfint Healthcare in India was looking for an ultrasound-based solution to liver cancer treatment. Because of the reputation of Robarts as a world-leader in the development of 3D ultrasound guided interventions Perfint became aware of the groundbreaking work and contacted Dr. Fenster.

The current phase of the project is partly funded through the International Science and Technology Partnerships Canada (ISTP) program and the Department of Biotechnology India. Mandated by the federal government, ISTP Canada develops and implements R&D collaboration programs under Science and Technology (S&T) cooperation agreements between Canada and three of the fastest growing economies in the world: Brazil, China and India. The program connects high commercial potential companies in Canada with similarly positioned companies in each of the three ISTP countries.

Claron Technology, a medical imaging software development company in Toronto, is partnering with CIMTEC through the ISTP program to collaborate with Perfint in the design and development of this oncology therapy system. Claron is developing the visualization environment or user interface for the clinician. CIMTEC is designing and manufacturing the innovative robotic system and developing four “plug-in” modules that perform specific tasks, which are assessed and manipulated by the clinician in real time.

The ablation procedure is performed in an ultrasound suite where the ultrasound transducer is moved across the patient’s abdomen using the robotic arm. The four CIMTEC-developed modules allow targeted liver tumour ablation in the following sequence:

1)    3D CT to 3D ultrasound registration:The procedure is performed in an ultrasound suite where a CT image of a segmented tumour is overlayed onto the 3D ultrasound image.

2)    Liver tumour segmentation:3D ultrasound image of the liver and tumour is used to perform semi-automatic segmentation. Any small errors can be corrected by the user using a 3D editing tool.

4)    Static ablation applicator segmentation software is used for verification of the applicator placement before ablation starts:Using manual initialization, the algorithm finds the applicator to verify it is in the correct location within the liver tumour before performing the ablation.

The project is moving ahead to deliver the entire system and up to six functioning units by the end of 2013. The 3D ultrasound-based oncology therapy system will first be tested in a clinical trial in London, Ontario and India. Following a successful trial and approval from the relevant regulatory agencies, it will be made available to hospitals performing liver ablation procedures. With this new technology, patients in developing and developed countries suffering from liver cancers will receive treatment with an accurate and cost-effective technique.

Description of images above, right:

Left - The long yellow and short blue lines indicate the path of two applicators (needles) in dynamic or real time as they are guided into the tumour for ablation.

Right - A 3D ultrasound image showing accurate placement of both applicators in the liver tumour before ablation is performed. 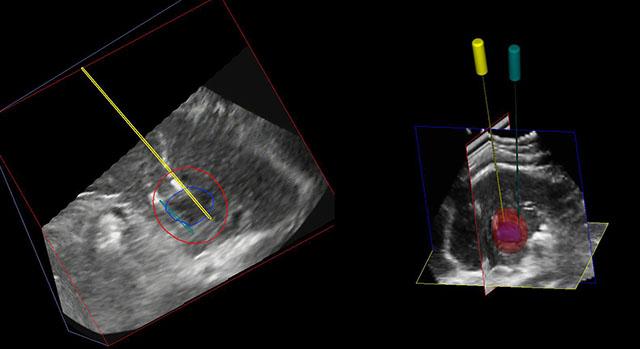