CIMTEC spin-off NeoVision was founded to commercialize the neonatal brain imaging technology derived from Dr. Aaron Fenster's research at the Robarts Research Institute and Western University. The intellectual property is managed by WORLDiscoveries.

Premature or low birth weight babies are at greater risk of complications and infant mortality than babies born at term or at a healthy weight (greater than 2500g o 5.5lbs).   Babies who have a very low weight at birth (less than 1,500g or 3.3 pounds) are even more likely to develop brain bleeds and 100 times more likely to die than those that are a low or normal birth weight.

In Canada 7.8% of births are premature and 6% of live births are low weight.  This percentage is even greater in less developed countries:  the world average is 11%.   The younger and smaller a baby, the more likely they are at risk of developing an intraventricular hemorrhage (IVH) or brain bleed.   Upward of 50% of extremely premature babies will develop a brain bleed.   IVH or brain bleeds are graded in severity from level I to IV.  Bleeds at level I and II are considered mild or moderate and long term damage is small.  Level III and IV bleeds involve substantial bleeding causing permanent brain damage or possibly death.

At present, babies at risk of IVH are monitored clinically by measuring the head circumference and by 2D ultrasound. The sensitivity of 2D ultrasound to measure ventricular enlargement is poor which can lead to variability and ambiguous grading of IVH.  Imaging preterm babies is also challenging for many reasons. Those born the most preterm (about 24-28 weeks) are those who should be screened more often; however, they are also the population who will more likely have spells of apnea, unstable heart rate, and who could require resuscitation and increased oxygen just from handling (touching, moving the baby). Additionally, these patients are incubator bound.

CIMTEC’s Chief Science Officer, Dr. Aaron Fenster, has developed the first 3D ultrasound imaging system that can be attached to a conventional clinical ultrasound scanner to image the ventricular system of pre-term babies.  The system requires less infant handling and can be done with the baby inside the incubator.   As well, it provides more accurate and consistent scans than the traditional 2D cranial ultrasound imaging techniques. Software developed in Dr. Fenster’s laboratory accepts the 2D ultrasound images as they are acquired and reconstructs the 2D images into a 3D image.

NeoVision provides accurate volumetric measurement of the neonate ventricles and therefore is currently the best method to assess and monitor IVH. The technology is superior to standard 2D ultrasound as it is less susceptible to operator variability, resulting in higher accuracy and less variability. Furthermore, it can image the infant while in the incubator and allows hospitals to have 3D ultrasound imaging capability at a lower cost.

The NeoVision system has completed a two year clinical pilot study at the Children's Hospital at London Health Sciences Centre in London, Ontario. The study generated very positive results with high specificity and sensitivity in the ability of the system to measure changes in brain ventricular volume.

NeoVision is ideally positioned to accelerate commercialization along with CIMTEC’s ongoing support.  Given that the current prototype was built strictly for clinical studies, CIMTEC will be providing the necessary technical expertise to develop a next generation prototype.  CIMTEC will be working with Dr. Fenster and NeoVision to improve the design of hardware and software with quality controls, as well as regulatory planning, validation, and commercial development. The redesign of this handheld device will include improved ergonomics and an improved user interface and segmentation process to make it more user-friendly.  CIMTEC looks forward to bringing to market this tool which holds the promise of reducing infant mortality and permanent disabilities through early detection of IVH. 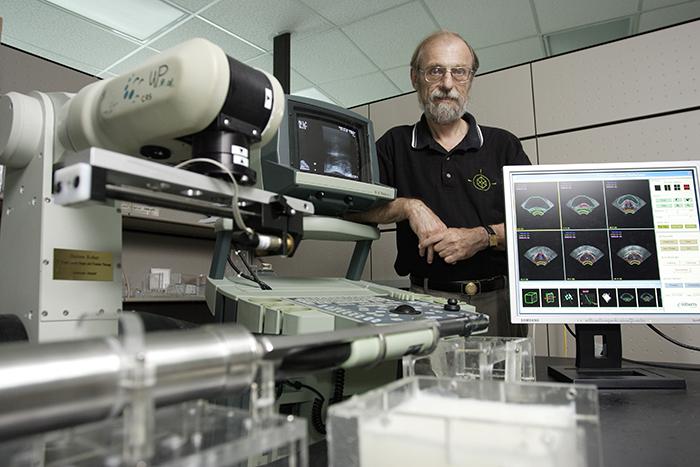